This release contains: 1 Related Document, 1 Photo 306-horsepower Civic Type R is most powerful production Honda ever sold in the U.S. 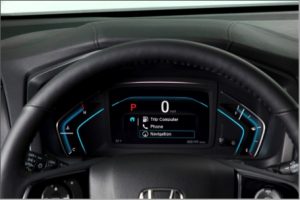 This release contains: 1 Related Document NOTE: Information in this document is preliminary, subject to change without notice, and intended for media use–not for consumers. For final information, visit automobiles.honda.com

Honda Automobiles: Honda Celebrates Four Decades of Accord – America’s Best-Selling Car Over the Past 40 years

This release contains: 1 Related Document, 41 Photos, 2 Videos With sales of more than 12.7 million units since its debut in 1976, Accord is America’s most popular, best-selling car over the last four decades 1 Honda has produced more than 10.5 million Accords in the U.S.

Nicholas Lee, National Advertising Manager, Honda Brand This release contains: 1 Related Document Nicholas Lee: Honda has been involved in supporting music for more than a decade and a half and this year, we are celebrating the 15th anniversary of “Honda Civic Tour”. Our connection with music encompasses several key consumer platforms from the long running, and highly successful Civic Tour to partnerships with some of the nation’s premier music festivals to Honda Stage – an online music channel that has received more than a billion views since its launch almost two years ago. And, if you’re a music fan, you should check out some of the exclusive performances from the industry’s hottest artists at YouTube dot-com – slash – HondaStage

This release contains: 1 Related Document, 3 Photos First U.S. spec vehicle will be on display from March 23 – April 3, 2016 Groundbreaking vehicle in production in Japan; headed to U.S. by end of year Clarity Fuel Cell features the most power in its class; anticipated EPA driving range to exceed 300 miles Five-passenger Clarity Fuel Cell features advanced technology including Honda Sensing TM and support for Apple CarPlay TM and Android Auto TM Honda is giving media and consumers a first look at a U.S. 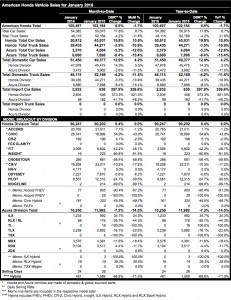 This release contains: 1 Related Document, 9 Photos 60-second commercial features music by Queen, performed by some unlikely and unforgettable co-stars Directed by Bryan Buckley, creator of more than 40 Super Bowl ads Extensive multiplatform campaign to support launch of new TV spot Consumers can enter to win a first drive of new Honda truck at “Camp Ridgeline” Honda today offered a sneak peek of the brand’s commercial for Super Bowl 50 starring the highly innovative 2017 Honda Ridgeline pickup, a wily herding dog and a flock of sheep singing a classic Queen song, “Somebody to Love.” Fans tuning in to Super Bowl 50 on Sunday, Feb. 7, will see the 60-second spot, “A New Truck to Love,” during the third quarter, but the entertaining commercial is now available for viewing in its entirety on Honda’s YouTube channel ( http://honda.us/BigGameCommercial ). Directed by Oscar-nominated director Bryan Buckley — dubbed “King of the Super Bowl” for his role in bringing to life more than 40 commercials for the big game — the new Honda commercial imagines how a rancher might use one of Ridgeline’s available features, the industry’s very first factory truck-bed audio system, enabling music to play outside the truck.